Nestled in the region containing some of the world’s largest potash producing solution mines, Western Potash Corporation’s Milestone Project is located approximately 30 kilometers southeast of Regina in Saskatchewan, Canada. And includes more than 87,500 acres of Crown held Mineral Leases and more than 60,000 acres of acquired Freehold Leases. The Milestone Project is currently constructing Phase I of a world-class potash mine in an ecologically sustainable, economically efficient, and socially responsible manner. This will be the first potash mine in the world without surface salt tailings, thereby significantly reducing the project’s impact and water consumption.

Since beginning exploration work on the property in 2009, Western has advanced the Milestone Project from concept to execution. The Company has completed a number of pre-feasibility, feasibility and detailed engineering studies as well as significant drilling and 3D seismic. In 2019 almost exactly 10-years since its inception, Western Potash broke ground with the drilling and developing of three solution mining caverns on the most innovative and environmentally friendly solution mine in Saskatchewan. The caverns are in full operation producing potash from recirculated brine that is being pumped and heated from the crystallization pond into the caverns. This preferentially extracts the potash (KCl) from the caverns while leaving the salt (NaCl) in the ground.

Along with the innovation, Western is committed to the environment, and is recirculating more than 90% of the water in the process.  Any additional water is taken from a deep Manville water well about 10 kilometers from the Phase I site, which produces brackish water that is not suitable for potable or agricultural use. The project maintains all applicable operating and environmental permits, and works closely with local businesses, government, and the community to ensure a sustainable business. The local operation currently employs around 25 people and has a 24/7 operations site office at the Phase I site. 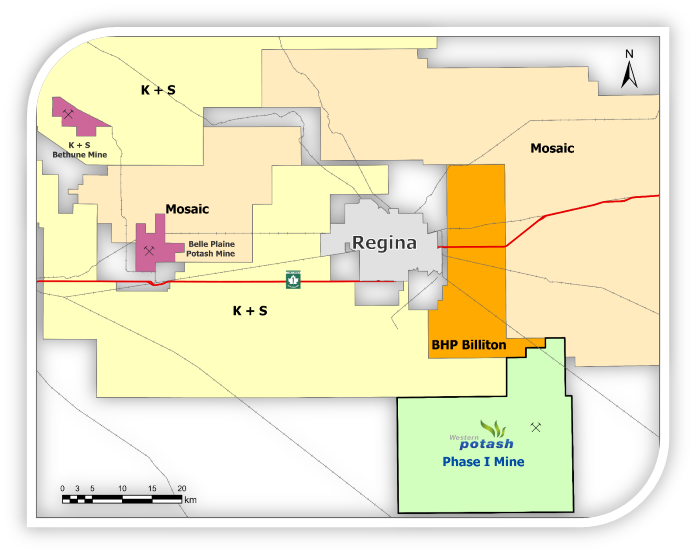