Potash has played an important role in both the development and economy of Saskatchewan for over 40 years.  Potash was first discovered in Saskatchewan in the process of drilling for oil in the early 1940’s, although active potash exploration didn’t begin until 1951.  In 1958, the Potash Company of America became the first potash producer in Canada with the commissioning of a conventional potash mine at Patience Lake which is still in operation today now under Potash Corp, Patience Lake but has since been converted to a solution mine because of water leakage in the shaft. In 1964, Kalium Chemicals Ltd. opened the world’s first potash solution mine near Regina, which has gone onto become Mosaic’s, Belle Plaine operation. Today, Canada exports 95% of its potash to over 50 countries around the world, and along with all the agricultural exports can rightly claim to ‘feed the world’.

Typically, when people think about mining they imagine men and women being sent underground to operate massive mining equipment and with nearly 80% of the global potash supply coming from conventional mines, its not surprising.  Conventional mines are like large underground towns with numerous rooms and pillars spread across 1000’s of metres.

Conventional mines are developed in areas where the potash is close to the surface, about 1000 metres. The initial step in developing a conventional mine is sinking a large shaft into the targeted formation. The shaft is used to transport employees to and from the surface, lower large pieces of mining equipment and to transport the potash to the mill.

Safety is always of upmost importance in any industrial site and since men and women are physically underground mining the potash, roof stability becomes a major safety concern.  Engineers carefully design “rooms and pillars” for the massive mining machines to slowly grind away.  The high-grade potash pillars that are left behind are holding up the formation and unfortunately can never be mined. 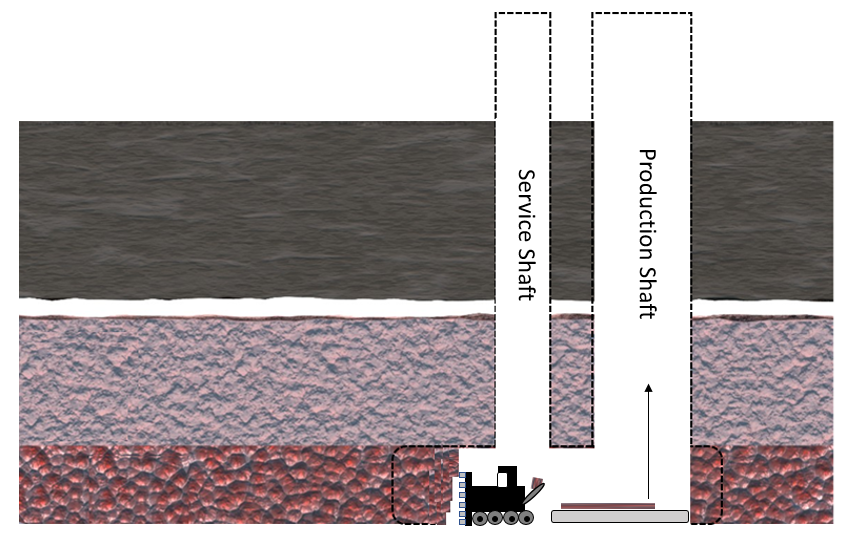 Solution mining has been a hot topic in Saskatchewan recently because, up until this year (2017), Mosaic’s, Belle Plaine potash mine was the only potash solution mine, by original design, in Saskatchewan.  K+S Potash Canada produced its first tonne of potash making it the first greenfield potash company in Saskatchewan in over 40 years.

The solution mining process starts by first drilling two separate wells below the targeted potash member into the salt. Each well is injected with fresh water to develop a sump that will be used to hold impurities when mining begins.  These initial wells are treated individually at first but only until they connect and once a connection happens between the two wells, roof expansion is used to increase surface area so primary mining can start. Mining engineers stop short of their targeted cavern footprint so the secondary mining process can be initiated.  By injecting hot brine into the cavern, the roof and walls begin to slowly dissolve the potash. During all stages of the solution mining process an oil blanket is injected into the cavern to prevent uncontrolled vertical mining.  This oil blanket is important because you can never mine down in solution mining.

To remove the potash from solution, typical solution mining operations have the flexibility to use both mechanical and pond crystallization. The mechanical evaporation method is used entirely for the primary mining stage and only partially for the secondary mining stage. 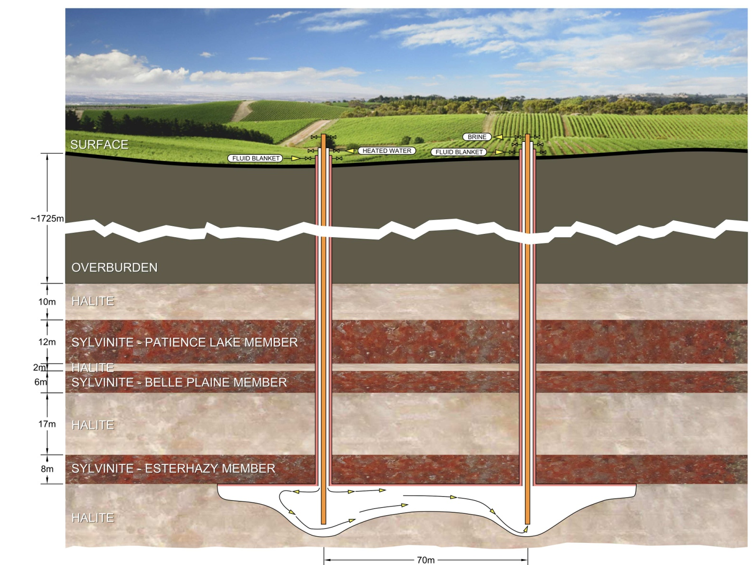 As commodity prices continued to drop in 2014 it became increasingly more apparent that entering the potash market, as a greenfield company, was proving to be difficult. Instead of giving up and leaving Saskatchewan, Western Potash was determined to stay and creatively came up with a new way to mine potash using selective horizontal solution mining.  This new innovative mining technique has never been done before in Saskatchewan to extract potash.  However, a similar technology has been used before in other parts of the world.

Typical solution mines take years to develop a cavern and begin producing potash.  With this new technology, we are expecting to see high grade brine almost immediately.  We will achieve this by bypassing the primary mining stage.  Selective horizontal solution mining consists of injection and production wells that are directionally drilled to the bottom of the potash layer. The production well is designed to intersect with the injection well and the injection well is then extended horizontally from the intersection point.

Hot brine is injected through the injection well to reach the far end of the horizontal well, the saturated brine flows back toward the recovery well gradually enlarging the horizontal cavern as potash is selectively mined and transported to the surface. Vertical growth of the cavern is limited by the salt layer immediately above the potash. Since the brine is nearly saturated in salt when it is injected into the potash formation no more salt can be held in the brine and only the potash is dissolved.  Because of this, we have the benefit of not having to rely on oil as a cavity control fluid in addition the salt stays underground where it belongs, hence reducing our environmental footprint.

Unlike a typical solution mine, that requires millions of cubic meters of fresh water a year from lakes in Saskatchewan, Western Potash is targeting brackish water (not suitable for drinking or irrigation) as our process water.  This brackish water is located much deeper than fresh water aquifers and will be cemented in place to ensure they are protected.

To remove the potash from the brine instead of sending it to an evaporator and crystallizer, like typical solution mines, which cost a lot more money to operate and have an increased environmental impact, we are sending our brine to a crystallization pond to let mother nature remove the potash. When the hot brine enters the cold crystallization pond, potash begins to fall out of the solution.  A dredge will be used to harvest the potash from the bottom of the crystallization pond and pump it to the processing facility in a similar fashion to a typical solution mine.  Essentially everything underground is new and what we are excited about being the first company in Saskatchewan to try and everything above ground is tried and true! 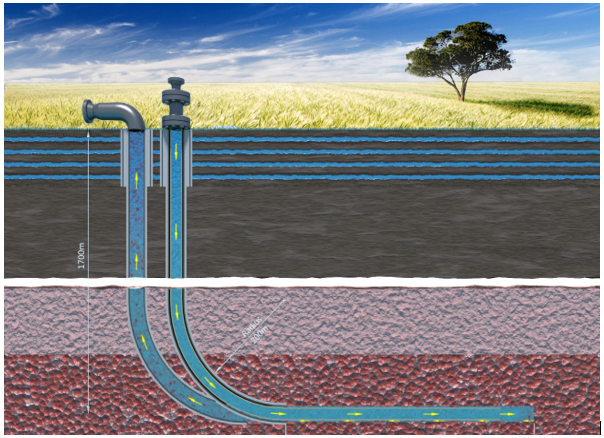 No tailings pile – salt stays underground or is utilized in the process.

Reduction in emissions -  without the use of mechanical evaporation and crystallization.

Less noise – relying on mother nature to remove potash from solution instead of mechanical evaporation and crystallization.

Half the amount of water - no primary mining required unlike a typical solution mine.